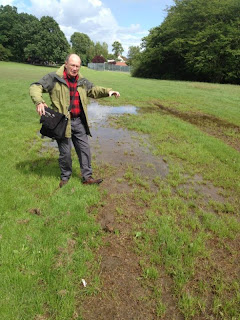 Cancelling the East Finchley Festival was a hard thing to do, especially as it was the first time in about 35 years that it had been cancelled. But the picture above, taken on the Sunday that the festival would have been, shows why we had to cancel it.
It had been almost a week since it had rained, yet there was still that level of surface water. the entire centre of the field was aquagmire, and it would have been worse with cars, vans, stalls and 10,000 people trampling over the field, bringing up more water to the surface. A few years ago, during a very wet day for it, some damage, costing several hundred pounds was done by cars in the field. The park is a community asset, and damaging it is well beyond what anyone involved would want to see, as well as unaffordable tot he festival. There is a £2,500 deosit paid, and returned if no damage is done, but if there is than it is taken out of the deposit. If the damage exceeds the deposit, then we would have had an unlimited liability. So I think we made the most prudent choice. It was a very tough call for all of us, especially Colin.

but there are wider problems with the woods that need to be addressed. There has been a severe drainage problem there for 15 years, and it drains very slowly after any sort of rain. I understand that there are underground streams below the field, but the biggest concern is that the drainage may be blocked. On friday the Chief Exec of Barnet Council, Nick Walkley will be doing a walkabout in East Finchley, and we will be raising the drainage with him, so I look forward to a response.
Posted by Unknown at 00:06