Rally against One Barnet

I was doing the East Finchley surgery yesterday, so was unable to meet the BAPS march against One Barnet until past Tally Ho. Apart from having to march in a suit because of a later engagement, I enjoyed going on what is my second "demo". There were lots of good friends and familiar faces there- there were so many Labour councillors that we could have had a quorate group meeting! It underlies how much work the Labour party have done to campaign against One Barnet consistently for a number of years.

We were not allowed into Victoria Park, which was a joke. I said in a previous post about transparency that there should be a degree of common sense in working with groups which are critical of council policies. Antagonising critics only makes them stronger critics with another grievance.

There were a lot of speeches, John Sullivan, Helen Michael, Jeffrey Newman all spoke very well. Andrew Dismore spoke about how defeating Coleman has helped already change things for the London Fire Brigade. Barry Rawlings, who represents Friern Barnet Library in his Coppetts ward, spoke about how you can't commercialise capitalism, which I thought was a good line. 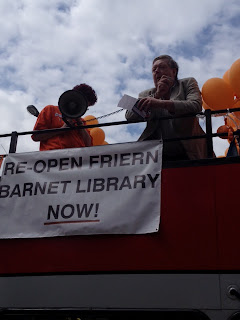 Rabbi Newman was very concise and to the point- he said we need to go into Tory held wards and tell people there that this is wrong. I wholeheartedly endorse those comments.

We then ajourned to Cafe Buzz, where Andreas decided to help Helen by serving behind the counter. He is a trained chef after all! there was live music and I think it was a good end to the morning.

I think we have really highlighted to Finchley residents what One Barnet is, and I hope the roadshow will move on to Hendon and Barnet.