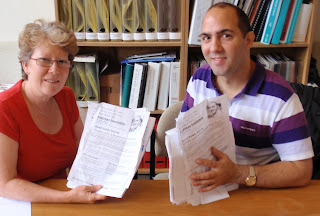 On Friday, my newest colleague, Cllr Andreas Ioannides and Alison Moore, who is leader of the Labour Group on the Council, went through responses sent from residents in the Brunswick Park ward for a survey. The survey was about proposals to create pedestrian crossing places, at the expense of parking spaces, on Russell Lane. I won't pre-announce the results of the survey, you will have to wait for that! But I can say that they were clear, and we have had an exceptional response rate.

It can be very difficult to get pedestrian safety right, and the number and location of crossings are very important, especially if they involve the loss of up to 20 parking spaces on an already struggling shopping parade. But Andreas came to the issue with an open mind, and is listening to residents. I knew that he would be a hard worker, and that he is so successfully up and running shows how talented and dedicated he is.

It's interesting that we are having this consultation at all, as the Tory administration have already declared a u-turn on their proposal to review all crossings with a view to removing them. This would have been a costly waste of time. It was also, frankly, a little disingenuous that they were promising to work with the Walksafe N2 campaign while carrying out this review. We have already manage to get them to reinstall the railings outside Martin School, which they took away during the pavement works and did not want to replace. We were also annoyed that they promised to review pedestrian safety near the school, but then immediately dismissed our request for a 20 mph zone on Church Lane. They did this on the basis that it wasn't "policy", despite there being other 20 mph zones in the borough.

I hope Andreas does not have the same sort of problems on this that we have, and that the Tories have learnt some humility and will listen to what the public say.
Posted by Unknown at 23:45