I write this just as the Olympic opening ceremony starts. I thought I would share the rather hectic wednesday on which the Olympic torch visited Barnet.

I started very early, getting to the Town Hall for 8 in the morning or so. Managed to get through my planning papers, which was useful. We all started gathering outside at about 11 in the sweltering heat. I was wearing a suit which was to prove nearly fatal. because I was milling around, I couldn't get a seat at the front, so Cllr Kath McGuirk, Cllr Robert Rams, Cllr Sachin Rajput and I ended up standing on the metal benches, which turned out to have a rather good view. The atmosphere was so good, people who normally don't breathe the same air were chatting... 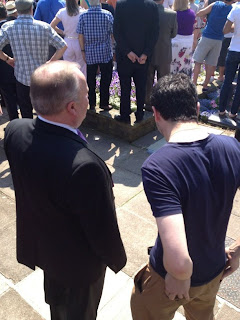 Anyway, the torch passed, held by 100 year old Diana Gould, the eldest torch bearer. She got an excellent reception in front of the town hall, and on her arrival in Middlesex Uni (where we had all hot footed it).  Boris Johnson flounces in (I am going to go mad if I hear his announcements on the bus and tube for another month). He went in a little enclosure round the middle of the atrium, and after the press photos were taken, did his press interviews. I decided to leave.

I hot footed it to Hendon Central and took the tube to Golders Green, then a long journey to Friern Barnet, to watch the torch pass a second time. I went to support Barry and Pauline against the closure of the Library, not that there was any real protest or dissent.

After going back to the Town Hall to read the Health and Wellbeing papers, a group of councillors went to the Sangam Centre for the Barnet Refugee Service AGM, which I blogged about before.

Then we went to Victoria Park for a concert, which was interesting, though I didn't understand what any of it was about. I just liked the flying light up fairies. And the Crepe stall. And the, erm, ice cream van.

It was a very busy day, and have to admit a stressful one but a memorable one. I doubt I will ever see a centurion carry the Olympic torch, and I am sure all who saw it will remember it for long.

I hope this is the start of an excellent Olympic games.
Posted by Unknown at 22:00