Sunday has seen Mitzvah day, the Jewish day of volunteering. I went to Long Lane Pastures to help with a bit of gardening. I haven't done gardening for about 15 years, since I was in primary school, but I had a lot of fun, and see how gardening is both exercise, but also a bit of relaxation. I also realised that I have just two coats. A smart one and an even smarter one!

Cllr Jim Tierney, Cllr Anne Hutton and Cllr Alison Moore joined me and some friends of the pastures to do a little work on the land.

We were raking the old dead grass and putting it onto a big compost heap. Apparently the pastures have always been grassland, but has poor soil. This is a good thing because the poor soil is good for flowers, which we want to encourage. Letting the dead grass rot and decompose will let nutrients into the soil, which improves the quality for the grass, but is bad for the flowers. I'm not sure I understand that, and Jim Tierney was a little perplexed by it too, but we did as asked.

It was good teamwork too, Anne, Alison and the regulars raked the hay, Jim and I collected it in wheelbarrows and dumped it on the compost heap. Having never seen, let alone used a real pitchfork before, I soon got the hang of it. It was a bit like using a fork to eat noodles. Just on a bigger scale.

It was a mild day, the sun was out and it wasn't too cold. during the break time I had this very refreshing elderflower cordial. I usually prefer my cordials entente, but never mind. I have to say, I really enjoyed the experience. Living in a block of flats, and being decidedly urban in my outlook, I've never really done any serious gardening, but I felt today was worthwhile and enjoyable. It was fun to work with the others, particularly Jim, who was more than handy with his pitchfork I can tell you! I bet Colin would be good at this sort of thing too.

It's a shame they do the work on Saturday mornings when we are busy because I would love to do this again some time. 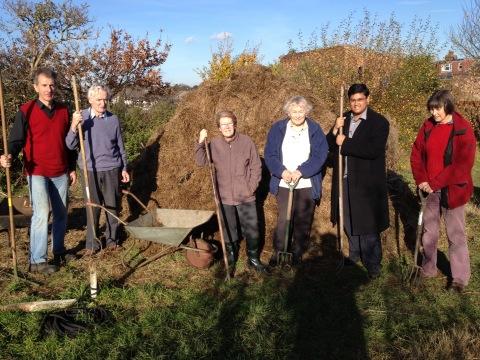