Barnet Council- welcome to the circus!

With the announcement today that the magical all singing all dancing "landmark" library in he Artsdepot will not be going ahead, and instead they will be turning the existing library in North Finchley into a "landmark" library, credibility has left Barnet. It joins prudence, transparency and community as words that have emigrated out of the borough.

The Council seems to be in chaos. They took the decision to move to the Artsdepot last year, closed down Friern Barnet Library 6 months ago, but did not have the deal for the "landmark" library settled. How incompetent. How shambolic. A farce only a clown could do well.

But the Council are persisting with their eviction order, and will not negotiate over the use of the building, only wishing to talk about this unwanted "community" library in Friary House. That they still won't listen is mean.

But negotiating with the occupiers in the first place, then breaking off negotiations abruptly and evicting the pop up library, in the basis they never had dialogue, is just bungling.

So who do you get with a clown, who is mean, but never implements his plans successfully? 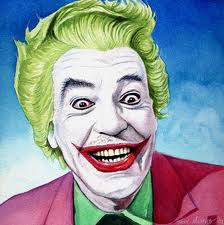 And the funny thing about Cllr Robert Rams is that last night, he replied to a tweet from me in support of the Christmas parking plans we have promoted. I was asleep, and out all day today, so didn't see the tweet till about half an hour ago, but my response is simple. I don't need lectures on costing from a man who spends more closing a library than keeping it open.

Perhaps if Barnet need a theme tune or anthem, this might do?

UPDATE: My colleague Barry Rawlings makes the point that the decision not to go ahead with the "landmark" library has been announced 6 months afer the closure of FBL, and so out of time for a judicial review. How cynical.

Continuing the circus theme, it seems one Councillor has been fired from a cannon!

And I have had a complaint from Dan Hope, who objects to using the joker as a picture. It is the joker from the 1960's batman series, and the point is that the Cesar Romero Joker got up to naughty things, but wasnt very good at it.
Posted by Unknown at 20:48