Cllr Pauline Coakley-Webb has been at it again, demolishing Tory nonsense.

We put out the following press release:

Labour Coppetts councillor, Pauline Coakley Webb has accused Barnet's Deputy Leader of making misleading comments in Wednesday's local press coverage that Friary House, in
has "better access" than Friern Barnet Library.
In response to the court ruling that the eviction of Friern Barnet Library "licensees" must go to full trial in December, Cllr Daniel Thomas was quoted saying, "We have offered a perfectly good alternative with better access but this has been refused by a small group who claim to represent the whole community."

Cllr Coakley Webb slammed Cllr Thomas for his comments saying: "Short of being in a parrallell universe I do wish Cllr Dan Thomas would check out the facts before speaking. Anyone going to the Friern Barnet Community Library, currently being so well run by the community, would know that the perfectly designed slip road, right outside the library front door, has FREE parking and designated disabled places. Even if you came in a wheelchair the distance from the car to the front door is a metre or two. Then there is a gentle short slope with handrails and there you have it you are in the library.

In comparison Friary House, which Cllr Thomas has offerred as a replacement volunteer library, is in the middle of a park. There is no car park on site so you have to find a parking space on the surrounding roads. You then have to walk to get to the park entrance, then walk to the middle of the park only to then find a much smaller community space than is currently enjoyed at the original purpose built, Friern Barnet Library!!  The truth is, Friary House has poor access, and is not wanted by the local community as a library space.

Meanwhile, 4000 plus, and rising, supporters to keep their library, is not what I would call a 'small group'. If that is a small group it makes Barnet’s Cabinet a dot on the horizon eager to be totally out of touch with the wishes of the community."

1. A link to the Cllr Thomas quote can be found here: http://www.times-series.co.uk/news/topstories/9976622.print/

The notion of Friary House being more accessible is frankly nonsense. Soon after my election, Alison Moore and I started helping the Barnet Asian Women's Association, who were based at Friary House. They wanted our help due to the inaccessibility of Friary House! They were unable to get parking spaces, and dial a ride were unable to get to the house, as the gates were shut. Also, the only rooms available were the mezzinine, which is not accessible by lifts!

I took this photo at the time, and it shows that the walkway to the house is long, and the lighting is covered by trees. given it gets dark by 4 pm in winter, is this really safe? Is this really accessible? 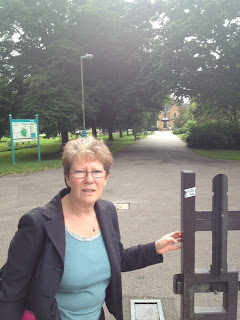